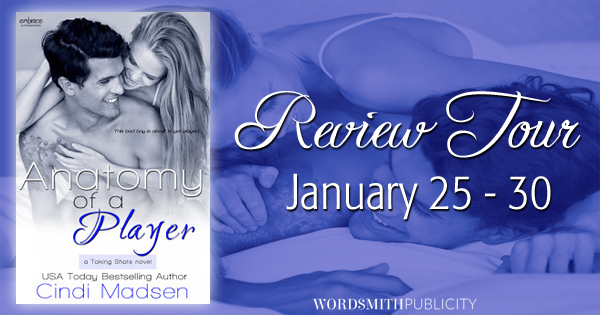 We're celebrating the release of Anatomy of a Player by Cindi Madsen! 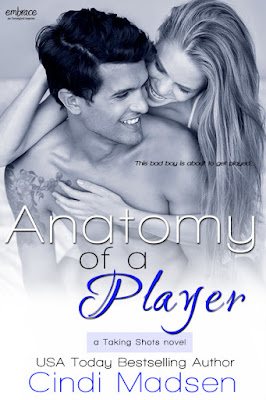 This bad boy is about to get played…

After getting her heart broken by a player again, Whitney Porter is done with men. She’s focusing on her future career and her first assignment at the college newspaper: Posing as a sports writer for an exposé on the extra perks jocks receive. But Hudson Decker, the bad boy of the hockey team, is about to test her resolve. To keep herself from breaking her no-sex rule with the temptingly tattooed athlete, she decides to use him for a side project: Anatomy of a Player, to help Whitney—and women everywhere—spot a player, learn what makes him tick, and how to avoid falling for one.

With his life spiraling out of control, Hudson Decker’s looking for a distraction. When his teammates bet him that he can’t land the gorgeous but prickly new reporter, he accepts the challenge, boasting he’ll have her in bed by the end of the semester. But Whitney is so much more than Hudson expected, and soon enough, he’s in too deep. The last thing he needs is another complication, but staying away isn’t an option. One thing’s for certain: this girl totally throws him off his game. 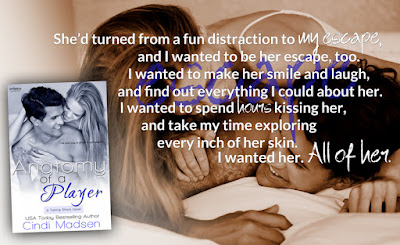 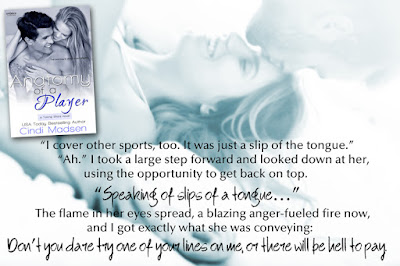 I received an advanced copy of this book in exchange for an honest review.

Whitney's "playdar"is on the fritz. Her most recent boyfriend turned out to be a jerk and she has had it. She swears off men, at least the ones of the player variety, and basically begs for a job on the school newspaper. Her first job is to write an article on how athletes at her school get preferential treatment, as well as cover the hockey team, which is funny because she knows nothing about hockey. Whitney also takes it upon herself to make herself look less attractive because she feels that people will take her more seriously.

As a member of the school's hockey team, Hudson is one of those people that gets preferential treatment, but personal problems and a heavy course load is stressing him out. When Whitney comes into the locker room after a game looking to interview the team, Hudson finds that he is intrigued by her. He accepts a bet (ugh!) from his teammates and starts on his journey to win Whitney over.

I liked that Hudson and Whitney were friends at first. They were so comfortable with each other and had a great rapport.


Once I trusted my voice, I said, “Now you know my nerdy secret. I love documentaries.”

“I can’t really comment on the nerdiness, can I? Because there were conditions against mocking it, and I’m afraid of what you’ll do to me if I cross you.” The teasing tone made it clear how little I scared him.

Too bad I couldn’t exactly say the same about him. He scared me in ways I couldn’t understand, even as I told myself I was controlling this situation by making him part of a study. That I was…

He slipped his fingers between mine, tightening his grip on my hand, and my heart relocated to my throat. Control the situation. Do…something.

I licked my lips. “Everyone’s got at least one nerdy thing about them,” I said, echoing what Lyla had told me. “What’s yours?”

I waited for the denial, or the smirk accompanied by a flirty “Don’t you want to know,” but he said, “Dinosaurs. I know a ridiculous amount about dinosaurs.”

“Really?” I asked, and he nodded, a boyish grin playing on his lips.

“What’s there to tell?” He shrugged a shoulder. “Do you want to know the fastest dinosaur—Ornithomimids. Or that the biggest—well, the one with the most convincing evidence of being the biggest—is the Argeninosaurus?”

A lightness entered my chest, the floaty sensation making it impossible not to be sucked further into Hudson’s magnetic pull.“I did want to know that. So, when did you get hooked on dinosaurs?”

“For Christmas one year, a lady I knew gave me a huge book on them—I was about six or seven. They were big and tough, and I read that book over and over, until I had it memorized. After that, any money I had went to collecting dinosaur books and figurines.”

His dark eyebrows drew low over his eyes. “It’s not cute—dinosaurs are not cute. If we were at my place, I’d show you how scary my dinosaurs are—there are sharp teeth involved.”

“Wait,”I said, twisting so I could see his face better but also keep holding his hand. “You’re saying you have dinosaur figurines in your room right now?”

“It’s not like…I didn’t…There’s just one or two on my desk. They’re badass.”

I bit back a smile and nodded. “Got it.”

Whitney tried her bet to resist Hudson and was able to do it, but while she profiled him as a player, Hudson was much more than that. He opens up to her and tells her things that he has never told anyone. He ends up trusting her completely and it ends up backfiring, but not in the way you would think.

I enjoyed this book, but it was the end that made me love it. Hudson makes a grand gesture that had me swooning all over the place. He may have been a player before he met Whitney, but she helped him realize that he wanted more.

I love this series so far! We got a little Beck & Lyla (she is Whitney's roommate and Beck is Hudson's teammate) in this book as well as Dane, Hudson's roommate and teammate. The author creates great characters and I look forward to seeing what the author has for us next! 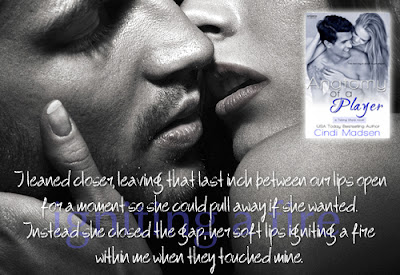 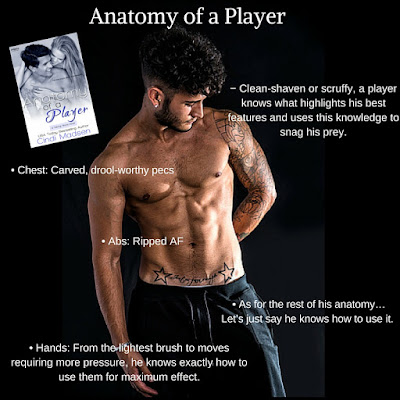 USA Today Bestselling author Cindi Madsen sits at her computer every chance she gets, plotting, revising, and falling in love with her characters. Sometimes it makes her a crazy person. Without it, she'd be even crazier. She has way too many shoes but can always find a reason to buy a new pretty pair, especially if they're sparkly, colorful, or super tall. She loves music, dancing, and wishes summer lasted all year long. She lives in Colorado (where summer is most definitely NOT all year long) with her husband and three children.

Visit her at www.cindimadsen.com, where you can sign up for her newsletter and learn about upcoming releases.

Cindi is the author of YA books All the Broken Pieces, Cipher, Rift, Resolution, and Demons of the Sun, and adult romances Falling for Her Fiancé, Act Like You Love Me, Resisting the Hero, Cinderella Screwed Me Over and Ready to Wed.
Posted by Kimmy Loves to Read at 11:29 AM