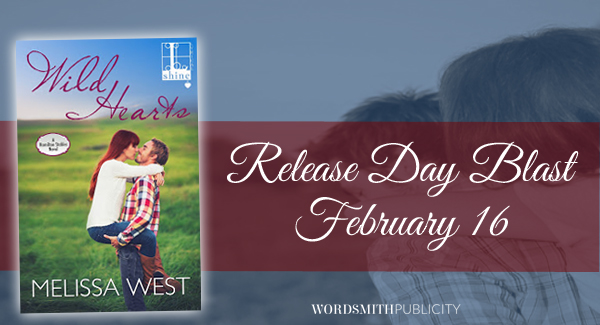 We're celebrating the release of WILD HEARTS by Melissa West! 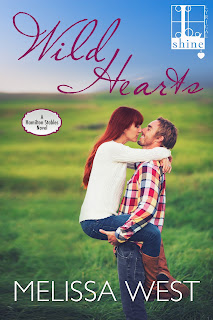 In the lush heart of Kentucky, horse racing is king, and the Hamilton family is royalty, born to produce champions. Maybe that’s because they understand wildness better than most…

Charming, reckless, and restless, youngest brother Alex Hamilton has a reputation for sweet talking his way into any woman’s arms—and failing at anything to do with the family business. So when he commits to managing their new breeding operation, it’s under one condition: he’ll focus on work and nothing else—no distractions, no fun…no women. But just when Alex has promised to keep his hands to himself, sweet, sexy Kate Littleton gallops away with his heart…

Kate knows Alex isn’t the long-term type—he proved that in a lot of delicious ways when they first met more than a year ago. But seeing him blazing with new dedication to Hamilton Stables, she can’t deny that he’s miles ahead of any other man who interests her. The attraction between them is electric right out of the gate, but it will take an unexpected loss to put them back in the race and headed for a passionate future together…


*This is the 2nd book in the Hamilton Stables series, but each book is a standalone novel.

"Kate, honey, you're too pretty for a mailman. You should date a fireman." Again with the firemen. Then Annie's eyes sparkled and she snapped her fingers, as though she'd figured it all out and could now properly wed Kate off. "I've got it! What about one of Trip's brothers?"

"Yes, what about one of Trip's brothers?" a rough voice said from behind Kate, and she knew without turning who had stepped into their conversation.

Annie held her hands out to Alex. "Exactly. Look at him. Cute as a button, and I bet he knows what to do with his parts."

Dear God, forget my prayer to live to seventy. I'd like to cash in my card right now.
"Indeed I do, Ms. Annie," he said with a wink, flirting with the woman. He had on rugged jeans and a T-shirt, flip-flops on his feet, his hair as messy as ever.

Annie-Jean smiled, because Alex had that effect on a woman. "You are trouble on toast, Alex Hamilton. You know that?"

"It's a tough job, Ms. Annie, but someone's gotta do it." He cocked his head at Kate, that smile of his taking shape. "So are you going to answer Annie's question or are you going to leave a man hanging? Why not get with one of Trip's brothers? I happen to know of one who wouldn't mind splitting his time with you." He looked her up and down, and Kate rolled her eyes.

"Does that crap work on anybody?"

"It works on everybody, and by the look of that flush on your neck, I'd say it's working on you, too."

Melissa West writes heartfelt Southern romance and teen sci-fi romance, all with lots of kissing. Because who doesn't like kissing? She lives outside of Atlanta, GA with her husband and two daughters and spends most of her time writing, reading, or fueling her coffee addiction.